2. After the Napoleonic wars an economic slump ensued resulting in unemployment and destitution which lasted for almost two decades.  The shipping lanes to America which had been closed by the war were reopened in 1814.

3. Famine. A series of natural catastrophes resulted in crop failure in 1816 to 1818, in 1821 and from 1825 to 1830. Cholera also repeatedly ravaged the poorest classes throughout he 1830s.The potato had become the staple diet of the Irish people by the 1840s. In 1845 a previously unknown blight appeared which rapidly destroyed the potato crop. It returned in the following years and it was until 1855 that the total harvest reached half of what it had been in 1844.The effect of the famine on emigration was immediate and dramatic. Between 1845 and 1855 more than 2.1 million people left Ireland almost 1.5 million of which went to the US. The character of famine migration differed from earlier migrations. Whereas only 60% of those arriving at New York were classed as “labourers” in 1836, that figure had risen to 79 and 90% by 1851-55. More than ever before these people needed financial assistance to pay for the crossing and this generally came from relatives. A family would combine their money or borrow to send one member (usually a son) to America and he would then send back money to bring out other family members. 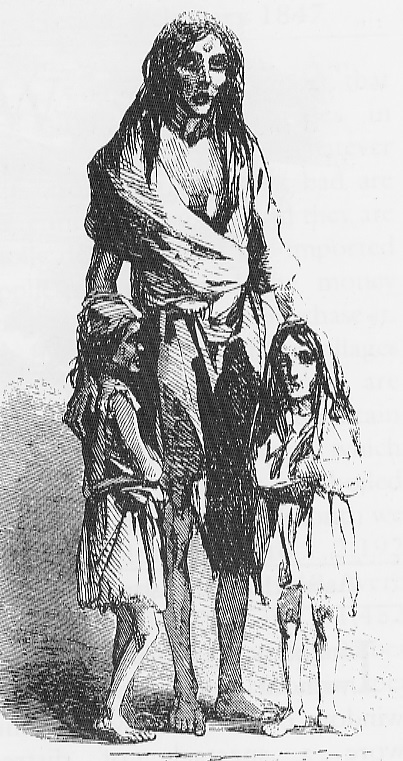 The famine in Ireland

4. The demand for manpower caused by the American Civil War particularly in industry and in the army. Over 200,000 Irishmen fought in the war, the majority in the armies of the North. Many of those were recruited in Ireland by agents who offered free passage and substantial bounties. Some left as part of assisted schemes which were briefly implemented by the British government from 1823 to 1825 which provided free passage and land grants to over 2,500 Catholic smallholders primarily from the Mallow and Fermoy districts of county Cork. In 1827 the government repealed all restrictions on emigration. Between 1828 and 1837 almost 400,000 Irish people emigrated to north America. By 1840 the pattern of Irish emigration had been set. Large numbers of southern Catholic Irish left from all areas of the country establishing an example for those left behind and a community of sorts which would absorb new arrivals.

5. After the famine economic deprivation continued to be the main spur in sustaining emigration. Mass evictions, the near-famines of 1861-1864 and 1879-82, the continual grinding poverty of subsistence farming meant that America continued to be seen as  an opportunity to improve ones life chances.

6. Migration to the US declined during World War 1 when shipping was severely disrupted, but then resumed when the war ended. It reached a peak in the years from 1921 to 1923 and then began to decline due to international depression and US restrictions on immigrant numbers.

Please select the links below to read more information about the Economic Causes of emigration and Assisted Emigration schemes.

A major cause of emigration was the remittance sent home by relatives to help other family members to emigrate.  This lead to chain migration.

“What brings such crowds to New York by every packetship is the letters which are written by the Irish already here to their relations in Ireland, accompanied, as they are in a majority of cases, by remittances to enable them to pay their passage out.   It is from this source, and this mainly, if not only, that the Cork or Galway peasant learns all he knows about the United States, and he is not in the least likely to trust to any other.”  London Daily News, 1864. 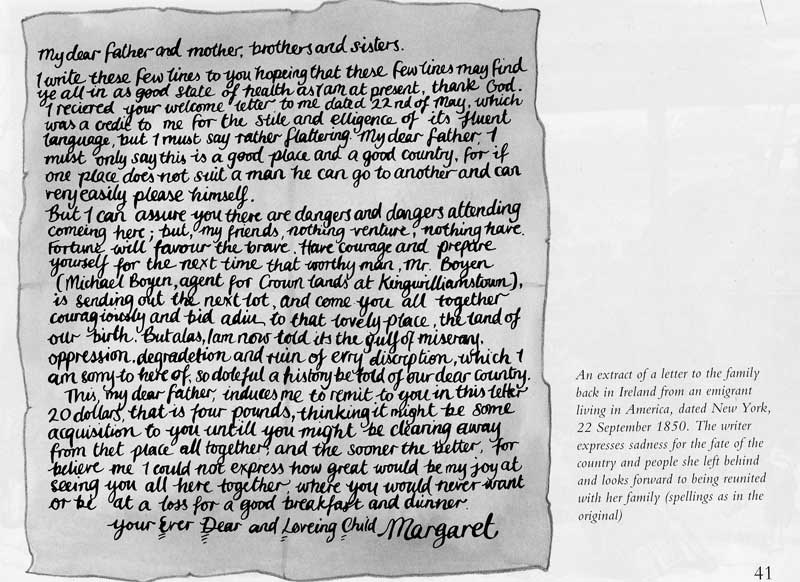 Rev. Patrick A. Ward wrote to the Limerick Reporter newspaper on April 24th 1849 from Liberty, America advising the Irish to come to America as “ the white slaves of Ireland” were thousand times worse fed than the black slaves of America who were better clothed and cared for. He stated that “claims” of 160 acres of land were selling for about $100 to $120 i.e. £20 to £25 because farmers were heading to California in search of gold. He advised that it was best to get a ship form Liverpool or an Irish port to New Orleans and travel up the Mississippi to the fertile plains where land was cheap and wages high. He warned that if people were obliged to come to New York, or Boston that they should not remain more than a fortnight in any of those eastern cities for many of their countrymen were paupers there.

A number of assisted emigration schemes also acted as a spur for those who could not afford to emigrate. Between 1856 and 1906 the Irish Poor Law Boards of Guardians financed the emigration of about 25,000 paupers, primarily to the United States and Canada. In 1882-83 Parliament passed legislation which subsidized transportation for over 54,000 more. Passage money also came from landlords, charitable institutions and private philanthropists such as Vere Foster and James Hack Tuke who together financed about 30,000 departures in the 1880s.