From the early eighteen century to very recent times emigration has been a distinctive feature of Irish life. Even before the Great Famine which began in 1845, Ireland was known for its exceptional outflow of people. While emigration from Ireland peaked in the early 1850s it has persisted with only brief remissions until the 1980s.  Most Irish emigration has been directed towards America. It is estimated that well over 6 million Irish people migrated to America since 1820.

In October 1845 a serious blight began among the Irish potatoes, ruining about three-quarters of the country's crop. This was a disaster as over four million people in Ireland depended on the potato as their chief food. The blight returned in 1846 and over the next year an estimated 350,000 people died of starvation and an outbreak of typhus that ravaged a weaken population. The figures for this period show a dramatic increase in Irish people arriving in the United States. By the end of 1854 nearly two million people - about a quarter of the population - had emigrated to the United States in ten years. 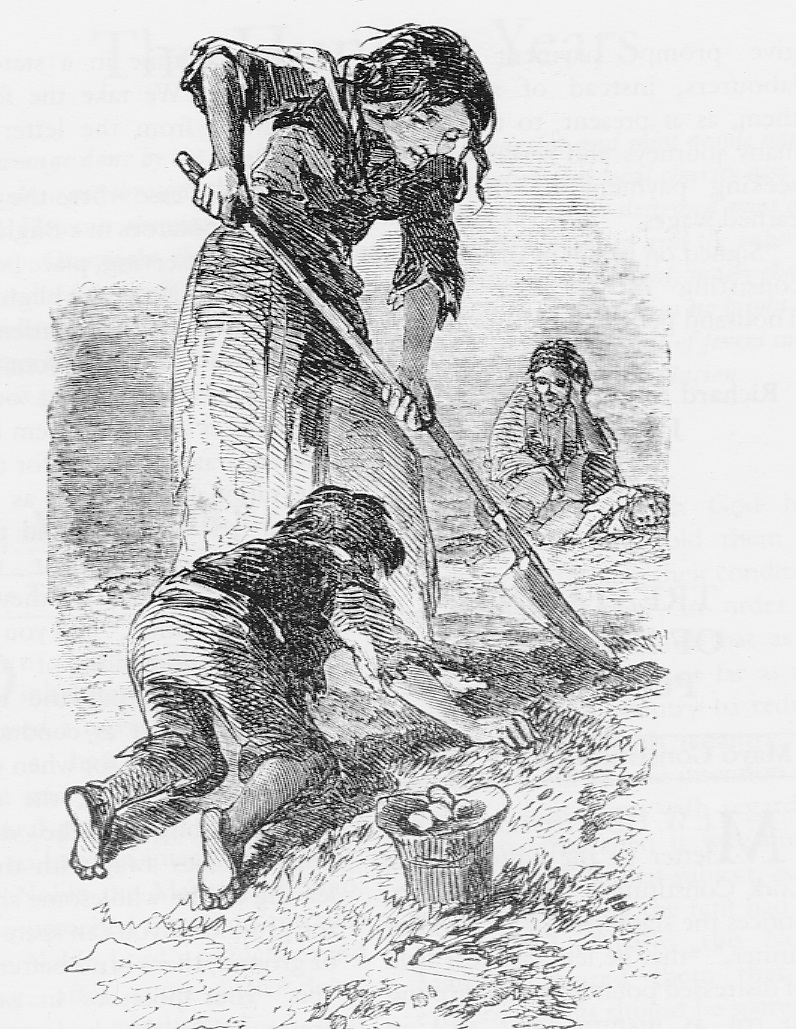 Trying to save some potatoes during the famine.

The figures below give some indication of the scale of the phenomenon :

A distinguishing feature of Irish emigration was the large number of females, often young single women, who emigrated to America. Between 1856 and 1921 half all Irish emigrants were young women. For example, between 1876 and 1885 the female /male emigration ratio from County Mayo by way of Irish ports to the USA was 120:100 and in the years 1886 to 1905 it reached a peak of 175:100.
Source; Fitzpatrick, David, “The Modernization of the Irish Female”, in P O’ Flanagan, P Ferguson and K. Whelan (eds.) Rural Ireland 1600-1900:  modernisation and change, (Cork, Cork University Press, 1987)

In Ireland emigration  has always been viewed as involuntary exile, something that was forced on people rather than chosen. The Irish word deorai means exile and this view of emigration as loss is also seen in the phenomenon of the "American wake" which linked emigration to death.  Another characteristic of Irish emigration is that very few emigrants ever returned to Ireland.  Today one sixth of US citizens (43 million) identify their national background as Irish.