Mayo was also awarded 6 Green Coast Awards.  These awards are given to beaches which have excellent water quality but may be less developed and less populated than Blue Flag beaches.  The Mayo beaches included in the Green Coast Awards are Tranaun Beach on Inishturk Island, Termon Beach, Srah Beach, Cross Beach in Belmullet, Portacloy Beach and Rinroe Beach.

The Green Coast Award is a symbol of environmental excellence and has been established to acknowledge, promote and protect the environment of our beaches.  The award is for beaches which have excellent water quality, but which are also prized for their natural, unspoilt environment.  These sites must be managed in partnership with the local community to be considered for the Green Coast Award.

Martin Keating, Head of Head of Environment, Climate Change & Agriculture, at Mayo County Council welcomed the Blue Flag Status and Green Coast for the 17 Mayo beaches  “We are delighted to have regained the Blue Flag on Golden Strand beach in Achill, but somewhat disappointed that despite our best efforts we have fallen marginally short of meeting the required standard for Blue Flag on Bertra and Old Head.  We will redouble our effort over the coming bathing season and would ask beach users to assist us by eliminating dog fouling on these beaches as it has been identified as a potential source of impact on the water quality.  The Blue Flag and Green Coast Awards are a global recognition of high standards of Mayo beaches.  I would like to acknowledge the work of The Environmental team and Municipal District staff at Mayo County Council together with local community groups and other agencies for all their efforts in ensuring that our beaches continue to be maintained at the high standards required to be awarded Blue Flag and Green Coast for the 2021 bathing season”. 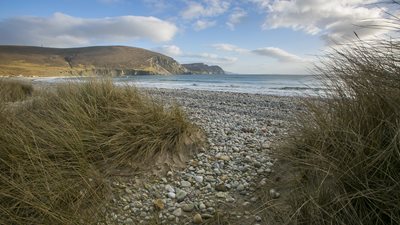