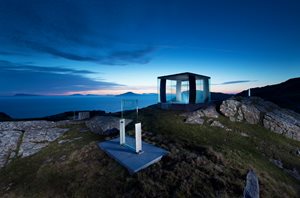 Over the last 12 years, Travis Price, an architecture professor from Washington DC, has been building mythological portals in remote areas of Mayo and even remoter areas around the world under the title Spirit of Place.

There’s been a star-gazing temple at Machu Picchu, a Snake Shrine in Nepal and a floating oratory on the Amazon, as well as some amazing shrines and sacred portals along the Mayo coastline.

With the help of architectural students from the Catholic University of America, Washington DC and local Mayo craftsmen these otherworldly art projects celebrate Irish stories and mythological understandings in a modern idiom.  They have won prestigious awards from the American Institute of Architects and covered in the Washington Post, NY Times and National Geographic, but are barely known in Ireland.

In Mayo you can discover:

For more detailed information check out the the Spirit of Place website.

Or The Mythic Modern:  Architectural Expeditions into the Spirit of Place by Travis Price, a publication: with an introduction by Wade Davis of the National Geographic Society.