Approximately 1.7 million Irish adults participated in sport at least once a week in 2019 according figures published by Sport Ireland today. The Irish Sports Monitor 2019 shows that participation rates have grown by 3% since the publication of the 2017 edition, which equates to an additional 150,000 people.

Personal exercise remains the most popular activity for Irish adults at 16%, followed by swimming (9%), running (7%) and cycling (4%).

The Irish Sports Monitor has measured adult participation in sport and physical activity since 2007. The latest report, produced in conjunction with Ipsos MRBI, presents findings based on interviews with over 8,500 adults aged 16 and over conducted between January and December 2019.

Minister for Media, Tourism, Arts, Culture, Sport and the Gaeltacht, Catherine Martin TD, welcomed the positive upward trend: “The Programme for Government and the National Sports Policy set ambitious targets for increasing the number of adults regularly playing sport; the 3% increase in participation rates announced today is a solid start to that journey”.

The report finds that those who participate in sport and other forms of activity – both physically and socially – exhibit higher levels of positive mental health. Aside from the increase in active participation, improvements were also reported in the numbers attending events, taking up club membership or involved in volunteering – up to 47% from 45%.

The report found that there was significant reduction in the number of inactive adults i.e. those not regularly taking part in sport or recreational walking.

Chairman of Sport Ireland, Kieran Mulvey, commented: “It is very encouraging to see an increase in the number of people participating in sport and also in social participation through volunteering, club membership and attendance at sporting events”

Chief Executive of Sport Ireland, John Treacy, said: “The findings announced published today are encouraging overall  and results are moving in the right direction. In particular, it’s welcome to see a sustained participation rates in the younger age groups in the 16-34 bracket, with over 90% of people participating in sport citing improving health and fitness as a motivating factor”

The full report can be seen here https://www.sportireland.ie/news/participation-in-sport-jumps-3-according-to-latest-irish-sports-monitor-report 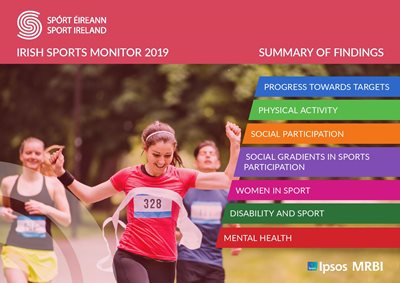