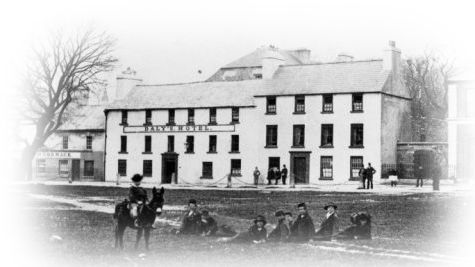 During the late 1870s, bad weather, poor crops and declining cattle prices produced an agrarian crisis in Mayo which left the people heavily in debt and unable to pay their rents. The crop failures revived memories of the Great Famine and resulted in spontaneous mass protest that was channelled, under the leadership of James Daly (1838-1911) and Michael Davitt (1846-1906), into the formation of the Land League in 1879. An historic meeting at Daly's Hotel on the Mall in Castlebar took place on 16 August 1879 and the Mayo Land League was established. 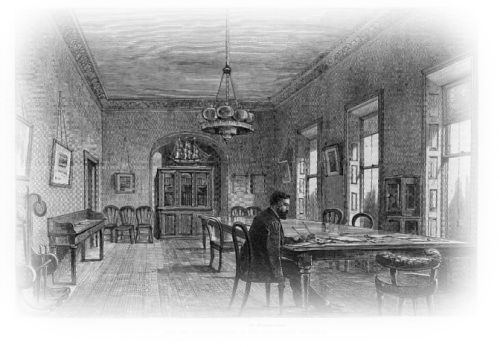 Illustration of the New Committee Room of The Land League in Dublin, with Michael Davitt seated.

It quickly grew into a national organisation, with Davitt taking the position of Secretary and organising Land League branches throughout the country. It combined nationalists of all shades in one mass agrarian movement and received strong backing and financial help from emigrants and supporters in America

The tactics of the League included mass demonstrations in support of reduced rents, resistance to evictions and opposition to new tenants replacing evicted tenants. Land courts were established under the Land Act of 1881 to arbitrate in rent disputes between landlords and tenants. The courts had judicial effect which meant that their decisions were binding 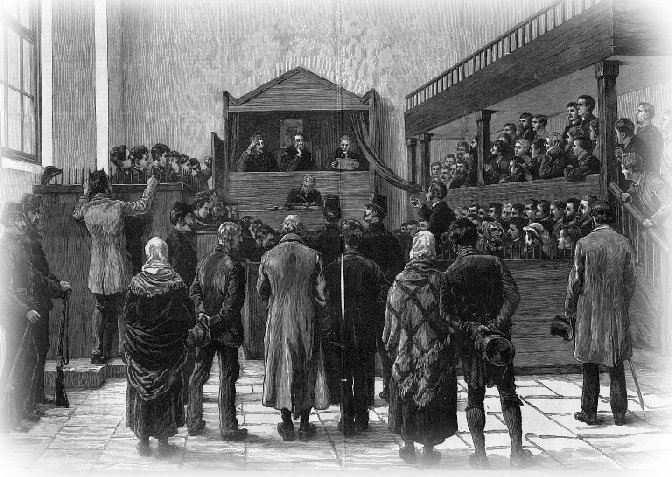 Opening of the new Irish land court in Connaught. A sketch in the Claremorris court-house, Co. Mayo 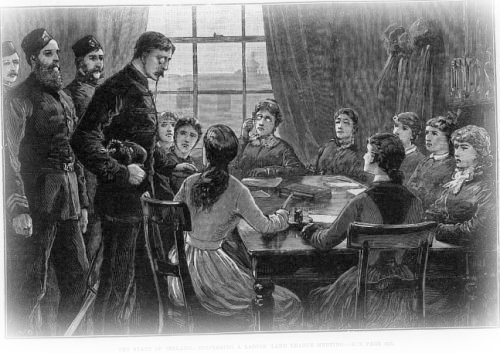 The state of Ireland -dispersing a ladies land league meeting.

The organisation operated in difficult times, when there was an upsurge in evictions and the 'No Rent Manifesto' campaign, which was a strike against rent payment. The Ladies' Land League monitored all these evictions and provided relief to those evicted, keeping detailed records on specially devised 'Eviction Forms'. They also organised resistance to land-grabbing.

Text courtesy of Rosa Meehan from "The Story of Mayo". © Mayo County Council

The Land Agitation in Ireland - sketches from Ballinrobe and Lough Mask. The Graphic, Dec 11 1880 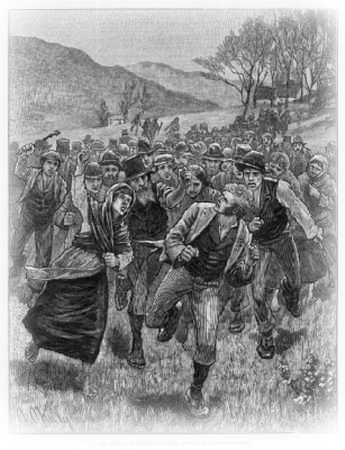 The Irish Land League Agitation, attack on a process server.

Popular defiance of the civil legal process was a feature of the land agitation which resulted from the establishment of the Land League. This manifested itself most noticeably in the manner in which "Process-servers", were prevented from serving writs on tenants. There were many instances where process-servers were attacked, with the result that many of them refused to carry out their duties for fear of their lives.

In its issue of May 21st 1881, the Illustrated London News wrote as follows:

Our Special Artist in the disturbed agricultural districts of the west of Ireland contributes another sketch of the perils that frequently beset a process-server when employed in the legal execution of his duty. Some remarks on this subject were made last week, having reference to the instance of a landlord near Claremorris, Mr. Walter Burke, who, finding that none of the ordinary process-servers in the country would venture to go round and deliver writs of ejectment to his defaulting tenants, has resolved to do it himself; galloping quickly, with his trusty servant, from one farmhouse to another; entering armed with a loaded revolver, not as a menace to others, but for his own needful protection, and after showing the legal instrument, of which he leaves a copy, riding off as fast as he came. 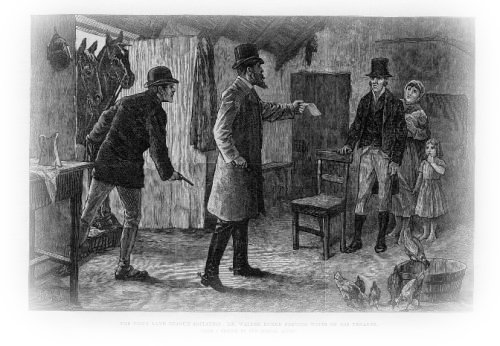 At the Ballinrobe Police Court: Magisterial examination of rioters on a charge of threatening Captain Boycott

Davitt had first-hand experience of eviction which he wrote about in his book, "The Fall of Feudalism in Ireland", (1904). Almost my first-remembered experience of my own life and of the existence of landlordism was our eviction in 1852, when I was about five years of age. The eviction and the privations of the preceding famine years, the story of the starving of Mayo, of the deaths from hunger and the coffinless graves on the roadside - everywhere a hole could be dug for the slaves who died because of 'God's providence' -

All this was the political food seasoned with a mother's tears over unmerited sorrows and sufferings which had fed my mind in another land, a teaching which lost none of its force or directness by being imparted in the Gaelic tongue, which was almost always spoken in our Lancashire home. 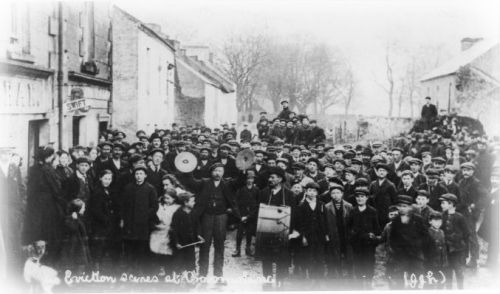 In 1886 the Connaught Telegraph documented an eviction which took place at Elm Hall, Belcarra, near Castlebar, where the Walshe family was evicted by the landlord's agents, Gardiner, Pringle and Cuffe.

On Saturday last, the savage crew, composed of Gardiner, Pringle, Cuffe and 50 or 60 policemen with three or four officers and a paid magistrate attended at Tully and Elmhall and succeeded in evicting two wretched families. There is nothing remarkable to be noted in the proceeding of the day further than we mentioned last week - that John Garvey and James Walshe were turned adrift and that the heartless wretch Gardiner assisted her bastard relation in removing the furniture from the cabin.

The cottage where the eviction took place has been restored as a museum by Belcarra Community Co-op who also commissioned a video dramatising the eviction.