The multi award winning Great Western Greenway - recently voted in the top 3 cycle trails in the world, by the New York Times - is Irelands fastest growing and most sought after tourism attraction. It is also Ireland's longest designated cycling and walking trail.

Running 43.5km around the eastern and Northern stretches of Clew Bay in Co Mayo. It begins in the popular seaside town of Westport and traverses through the quaint villages of Newport and Mulranny before coming to a gentle finish at Achill Sound.  Offering mild gradients courtesy of its initial beginning as a railway line and with magnificent landscape backdrops such as Clew Bay, Clare Island, the mythical holy mountain Croagh Patrick and the Nephin Beg Mountains.  You will travel through bogs, woodlands and active farm land, while spotting wildlife and flora, the Greenway has so etching unique for each and every visitor.

The History of the Railway Line

In the latter half of the 19th century, a narrow-gauge rail line was proposed from Westport to Achill.  Known as one of the 'Balfour Lines', this was completed in stages between the years1894-1895. In an era where road travel was appalling and difficult this line proved to be an incredible success initially.

While the rail line was of great economic and social benefit it did not reach the levels that was expected of it.  With the improvement of the road network and the increase in automobiles the passenger numbers diminished until in 1934 the rail stopped carrying passengers.  Freight continued to be carried until 1937 when this too was ceased.

For more information regarding the history of the Greenway, Iris Galloway's book "The Great Western Greenway" is available for purchase from local bike hire providers and local book stores. 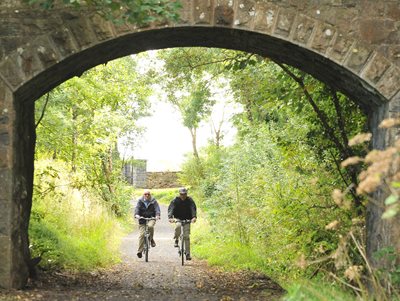