Firstly, they visited Carrowholly to mark the occasion of the substantial completion of the Scheme, where Minister O Donovan unveiled a plague at Knockaniska Bridge. This scheme, managed under the OPW Minor Flood Mitigation Works and Coastal Protection Scheme and led by Mayo County Council, was a result of extensive flooding in the area in early 2014. The works, consisting of 13 separate embankments and road raising, will protect 14 properties against future flooding.

Minister O’Donovan commented, “I am very much aware of the stress that flooding and the threat of flooding has on local communities across Ireland. Therefore, I am delighted to be here in Carrowholly today, to view another completed scheme that will help alleviate this stress for its inhabitants. I would like to thank all those who contributed to the success of this scheme including our partners Mayo County Council, Mott MacDonald Consultants and local contractors Stephen Cannon Plant Hire and Martin Moran Plant Hire”.

Afterward, the group progressed to Wesport, to officially mark the commencement of the Cois Abhainn and Ashwood Estates Flood Relief Scheme. They met with representatives of Cunningham Civil and Marine Ltd., appointed contractors for the construction of the scheme, and local residents.

The Cathaoirleach of Mayo County Council, Cllr Seamus Weir said “I am delighted to join with the Minister in unveiling this plaque to mark the completion of the Carrowholly flood scheme. This project provides long lasting protection to the people of Carrowholly against coastal flooding and extreme storms. The commencement of the Cois Abhainn and Ashwood scheme is also to be welcomed. When constructed this scheme will provide much needed reassurance to 36 residential properties for many years to come. I would like to acknowledge all those involved in bringing these projects forward”.

This approved scheme is a result of the extreme flood events of 2015 caused by the adjacent Carrowbeg River and will consist of the installation of flood walls and embankments to help protect these estates against future flooding. It is envisaged that these works will be completed by end of March 2023.

The Minister notes his thanks to all who contributed to bringing this scheme to site - Mayo County Council, the Office of Public Works, the local residents, the design consultant and the contractors. 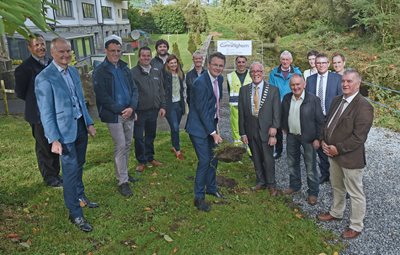