Go On Go On, Take A Break

Mayo County Council Communications office is undertaking a eye-catching initiative again for this bank holiday weekend. Mrs Doyle has joined the road safety team of Mayo County Council for the past five years, she has to deal with many challenges in part taking in this campaign from been stolen from the roadside to been vandalised but not even Covid19 will stop her from raising road safety awareness on which is deemed one of the busiest bank holiday weekends, she has taken all the public health safety advise onboard before taking to the roads of Co. Mayo.

Mayo County Council have teamed up with An Garda Siochana to organise a road safety campaign. The campaign has been given thumbs up by Pauline McLynn who played the part as Mrs Doyle in father ted and also by the production company Hat Trick productions LTD which produced FR ted which gave the road safety office of Mayo County Council a licence to use the images.

The campaign is called  'Go On Go On, Take A Break’ is its aim is to encourage drivers to plan their actions before they head out on their travels.

Road signs of Mrs Doyle (Fr Ted ) will be erected around the County, some will be located near or at some Corrib oil service station, which will have road safety slogans on them in an effort to remind drivers to freshen up by taking a break and to think about the consequences that driving tired. Sadly, many drivers are still falling into old habits, some of which can prove potentially lethal.

Mayo's Road Safety Officer Noel Gibbons said the August bank holiday weekend is by far one of the busiest and unfortunately the deadliest weekends on the roads. Using the roads is one of the most dangerous thing we do everyday, and people do so in a fashion that comes as second nature to them.You can't under estimate the importance of stopping for a break for a cup of tea or coffee,as Mrs Doyle would say go on go have a cup of tea. https://.youtube.com/watch?v=aaKT2AdJCAc

"This is a way to highlight the fatigue issue. Make no mistake – fatigue is a serious killer.

"This is more important for Ireland now than ever before because we are beginning to have long continuous stretches of motorway. Especially at this time of year, when people on holidays tend to drive long distances across the country, the dangers of fatigue are at their worst. "Take regular breaks when you are driving long distances, share the driving if you can, and never ignore the tell-tale warning signs of fatigue.”

“We have seen too many horrific injuries caused by people falling asleep at the wheel to take this lightly. "Sleep related collisions tend to be more serious than other road collisions because the driver is unable to react before a crash. You don’t fall asleep without a warning; if you are fighting to keep yourself awake, then get off the road!”

Miss Pauline McLynn said " I actively supports the campaign as its a very important topic".

The Cathoirleach of Mayo County Council Cllr Richard Finn said “We welcome all visiting our County , we hope you have an enjoyable stay and travel our roads safely, please take regular breaks and have a brilliant holiday.“

To increase awareness of the signs or symptoms of fatigue and the dangers of driving fatigued. The campaign will remind drivers of the need to take regular rest breaks and stop before tiredness sets in.

All motorists using our roads. 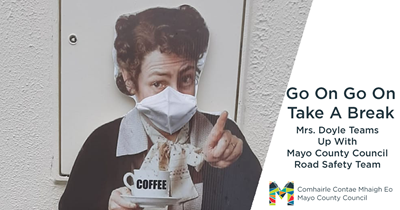