Heart-stopping footage has captured the reckless antics of drivers in a viral Tik Tok craze that authorities fear could end in carnage.

There are disturbing videos, showing drivers thundering down the road, while their hands and eyes are glued to their mobiles, and while their passengers film them for a TikTok prank, which are then shared on popular social media sites. These videos of drivers on their mobiles phoning their parents/or loved ones for example, telling them they are avoiding being caught by the Gardai for speeding because they were rushing home because a love one was injured or ill.

Didn't think anything could be more dangerous than using your phone while driving?

According to research by the RSA, driver distraction is thought to play a role in 20-30% of all road collisions. Distraction is caused by a competing activity, event or object from inside or outside the vehicle. The vast majority of drivers (over 39%) report using their mobile phone at least sometimes while driving and it is estimated that, at any given moment during the day, 2-6% of drivers are using a mobile phone.

Officials are urging motorists to think twice before making videos while driving after a new craze that involves uploading Tik Tok videos hit the internet.

This has alarmed road safety officers who are concerned drivers are being distracted when they are operating their vehicles.

‘It is a life endangering practice and It’s especially risky for young, inexperienced drivers – who are already extremely vulnerable to crashes – to be distracted when they are behind the wheel,’ said Noel Gibbons Road Safety Officer, Mayo County Council ‘Answering a call or reading a text is never worth a loss of life.’’

Declan Keogh, Road Safety Officer, Kildare County Council, said "Simply put, it is unsafe and illegal to use a hand-held mobile phone while driving for whatever purpose, except in the case of an emergency, and we're asking motorists to just drive for your safety and the safety of others.” 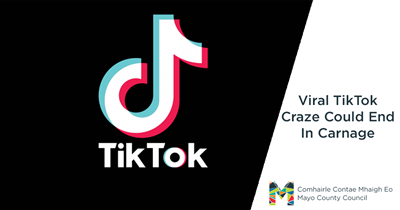