Road safety professionals from two opposing GAA Counties are teaming up to plea with drivers to take extra care around pedestrians, cyclists and motorcyclists as part of a campaign highlighting the needs of vulnerable road users, as we head into a weekend that Local Authority Road Safety Officers are asking the public to get involved and ‘light up’ or ‘shine a light’ to remember crash victims, survivors, their families and those on the frontline who respond to collisions and also a Connaught Football Final between Mayo and Galway.

Members of the public are being asked to join in and shine a light in their window on the evening of Sunday 15th November between 7pm and 8pm to remember those in their community who have died on the roads. Every year crash victims are remembered on the third Sunday in November and its also a day to acknowledge all good work of the emergency services.

Noel Gibbons, Road Safety Officer, Communications Office, Mayo County Council said: “We’ve already reached last year’s total for pedestrian fatalities, in a year where six months of the year the public were supposed to be staying at home. That’s the craziest part of all. Vulnerable road users do not have the same protection as a driver sitting in a vehicle and even relatively minor contact can seriously injure them. For this reason we are asking drivers to please take extra care around pedestrians, cyclists and motorcyclists using the roads.”

Nationally, 27 pedestrians, 10 Pedal Cyclists and 17 Motorcyclists have been killed on Irish roads to-date.

Tips for running in the dark https://www.mayoac.com/running-in-the-dark/

In Ireland more than a 1/3 (35 per cent) of road fatalities were motorcyclists in 2019, with 12 losing their lives.   The reasons for this can be complex but motorcyclists can be difficult for other road users to see, especially at junctions and are often moving quicker than you might think. Motorcyclists can also be affected by side wind, when being overtaken and are often injured when cars pull out of junctions.

Cyclists can be difficult to see, especially at junctions and are easily affected by side wind when being overtaken. Cyclists are particularly vulnerable at roundabouts as they cannot move off very quickly. Cyclists ride away from the kerb to avoid drains and debris and to be more easily seen.  Drivers are asked to take extra care when overtaking cyclists and to leave plenty of space (at least 1.5m or a car’s width).

Deirdre Caulfield, Road Safety Officer, Galway Co. Council said “We are hopeful this campaign will serve as a wake-up call to everyone who shares the roads, particularly on a weekend that we reflect on all those who have lost their lives and were injured on our roads and also thank all the emergency services for their great work”

Mayo County Council have produced a ‘Too Close for Comfort’ video to show drivers what it’s like to be passed by so closely, in order that so non-cyclists can understand it from a cyclist’s perspective - available to view at https://www.youtube.com/watch?v=ANHDtfuKCy4

Cyclists too can take action to help keep themselves safe on the roads. It’s important to check a bike regularly – especially the brakes, make sure you can be seen by wearing hi-vis and take extra care on the road particularly at junctions where three quarters of cyclist collisions happen. It’s also a legal requirement to cycle with lights between sunset and sunrise.

We are also advising drivers to take extra care around elderly pedestrians and children.

Motorists are responsible for adopting safe behaviour around pedestrians, cyclists and motorcyclists. 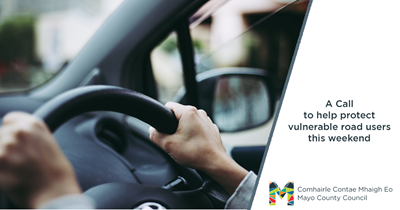