The awards ceremony will take place virtually over three days on December 7th, 8th and 9th

The Federation of Irish Sport has announced the winners of the 2021 Volunteers in Sport Awards proudly supported by EBS. The awards will take place virtually on December 7th, 8th and 9th and will include Westport based volunteer Peter Mullen who is recognised for his outstanding contribution to boxing over many years.

The Volunteers in Sport Awards celebrate the contributions of the band of volunteers across the country who give their time to Irish sport and physical activity every year. This equates to approximately 37.3 million hours of volunteering across Ireland’s 13,000 registered sports clubs and associations and, according to Sport Ireland's 2021 'Researching the Value of Sport in Ireland' report,s worth an estimated €1.5bn to the exchequer.

Throughout September and October members of the public, sports clubs and governing bodies were invited to nominate an individual whose contribution to sport and physical activity in Ireland has made a real difference to their community, club or county. The nominations and award recipients were selected by a judging panel consisting of 12 individuals drawn from sports administration, the volunteer community and media, and included former Director General of the GAA, Paraic Duffy, RTÉ broadcaster, Marie Crowe and CEO of Gaisce, Yvonne McKenna.

Commenting on the awards, Minister of State for Sport and the Gaeltacht, Jack Chambers, TD, said: “It is an honour for me to support this year’s Volunteers in Sport Awards and help recognise so many fantastic volunteers in our community. These awards have a special place in the sporting calendar as they recognise those who have given an incredible amount of time throughout the year who have ensured that sport can takes place in our communities, and they do so without the expectation of gratitude or reward”

Speaking about the awards, CEO of the Federation of Irish Sport, Mary O’Connor said: “Despite another very challenging year for sport, we have once again seen how important volunteering has been to communities across Ireland. We have an enormous amount of gratitude for the army of volunteers who have ensured that sport could take place in a safe and controlled manner. Whether it be on pitches, courts, tracks, pools or even community halls across the country, the volunteers are always there to make sure sport and physical activity continues to take place around Ireland”

Chairman Mayo Sports Partnership Cllr Michael Loftus commented: “ Its fantastic to see a man who has given so much time and energy to the sport of boxing recognised for his efforts. There are so many volunteers across the county who give their time selflessly and I would like to thank them what they do for sport in general”

The awards will be streamed live each evening from 7pm on the Federation of Irish Sport’s Facebook page here: https://www.facebook.com/federationofirishsport/ with the awards schedule listed below:

For more information on the awards, visit http://www.volunteersinsport.ie/ 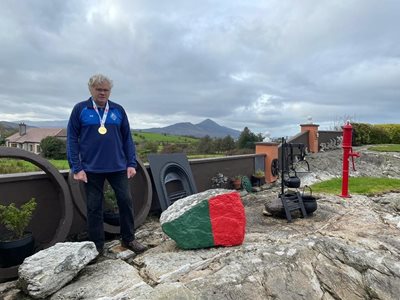