John Treacy to Retire as Chief Executive of Sport Ireland

John Treacy to Retire as Chief Executive of Sport Ireland

Chairman of Sport Ireland Kieran Mulvey said: “John Treacy has been a model Chief Executive that has led Irish Sport through action and strategic vision. The sport sector in Ireland is in a very strong position thanks to the leadership that John has demonstrated since taking on the role with the Irish Sports Council in 1999. His contribution to sport in Ireland both as an athlete and as a chief executive is immeasurable.”

Throughout his tenure, John has led and overseen countless initiatives that have improved the sporting landscape in Ireland. This included the introduction of the Irish anti-doping programme, increased financial support for the sector, the implementation of high performance systems and the roll out of the local sports partnership initiative to promote sport and physical activity in local communities.

Mr Mulvey continued: “While difficult to single out individual achievements, in recent years the establishment of supports and processes to improve governance and accountability in sporting organisations and the development of the impressive facilities on the Sport Ireland Campus are just two highlights. Looking further back, Ireland’s zero tolerance approach to doping in sport is internationally acknowledged and a testament to the leadership John has shown in this area. The roll-out of the Local Sports Partnership network has seen countless opportunities offered to people with a disability and those from disadvantaged backgrounds that would not have received such an opportunity before.

“On behalf of the Board of Sport Ireland, I want to thank John for all he has done for Sport Ireland and sport in Ireland, and wish him well in his retirement.”

Commenting on the announcement, John Treacy said: “It has been a privilege to lead Sport Ireland and the Irish Sports Council throughout a period of significant progress for Irish Sport. There have been many highlights, but in particular I am delighted with the significant strides made in women’s participation in sport and disability sport over recent years. While it was my intention to retire from the role last year, the postponement of the Olympic & Paralympic Games, the onset of the pandemic and the need to ensure stability changed those plans. With Sport Ireland now firmly established and the sector in a strong position to tackle any challenges ahead, I believe now is the right time for me to step away.

“I would like to pay tribute to all of the wonderful staff I have worked with over the years. I would like to thank the Chairman and members of the Board, past and present, for their enduring support. I would also like to acknowledge the staff and volunteers in the National Governing Bodies, Local Sports Partnerships and funded bodies, and pay tribute to all of our amazing athletes. I am also grateful to all of the ministers and government department officials I have enjoyed meeting and working with throughout years. It is incredibly satisfying that sport has remained a policy priority for Government, an acknowledgement of the strength of the sector. I wish everyone involved in Irish sport the very best for the future.”

Sport Ireland has commenced the recruitment process for the position of Chief Executive through Lansdowne Executive Search. Further details are available on the Sport Ireland website: HERE 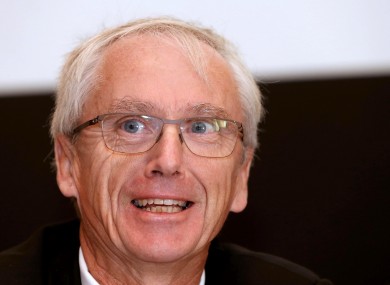