Look Out For Love-Crazed Deer On Our Roads

With the Irish deer population at high levels, Mayo County Council is reminding drivers to be extra vigilant on the roads this autumn.

At this time of year the male fallow deer is unpredictable and can travel several miles a day in search of a mate, crossing roads in the process.

The most common times for the male deer to roam are at dawn and dusk, which in October coincides with the morning and evening rush-hours.

Rutting season, where male deer clash horns over mating rights with females, is about to begin.

Drivers should beware of deer causing fatal accidents by bolting across roads, a road safety official has said. "With fewer cars on the roads over the last few months because of Covid19, we’ve seen all sorts of wildlife being bolder, and deer are no exception.

"We would urge motorists to be cautious and drive a little slower at this time of the year, especially on rural and semi-rural roads

Mr Gibbons road safety officer with Mayo County Council has warned that female deer fleeing across roads from stags during mating season can increase the risk of dangerous collisions.

He said rutting season - where male deer clash horns over mating rights with females - begins in October and runs into November. All of this action among the deer population is bad news for motorists, particularly in a rural counties where the number of deer and car collisions is a growing concern for road users. According to AA Car Insurance in the UK, the average claim payout for a deer strike is €1600. Some estimates suggest there are as many as 74,000 strikes annually, many unreported in the UK, while in Ireland the latest figures show there are around 400/500 collisions between motorists and deer in Ireland each year, resulting in human injury. "At 100km per hour, hitting a deer is serious – not just for the animal but car occupants as well. A natural reaction is to try to avoid the collision but as a result, drivers may miss the deer and hit other vehicles or trees which could be even worse.

“The reason it’s an issue this time of year is because as the rutting season begins the males chase the females across countryside areas,”

“These females are trying to get away from the males and will run in female-only groups.

“The problem is when they encounter a road they will all go at once and pay little attention to the fact they are crossing a road because they are distracted and in flight.

“This is often fatal for the animal but also they can be badly injured and suffer terribly. The main concern though is the risk to human life from striking an animal this size.”

He urged the drivers to be aware of deer crossing roads during the next few weeks.

He said: “Deer usually always cross roads in wooded areas as they use the trees for cover.

“If you are entering a wooded area at night slow down and be prepared.

“Speed is a major factor in people being injured and the animals killed so ask - is it necessary to travel at excessive speed on these types of road?”

“Motorists should be aware of the potential for deer to cross rural roads or those close to woodland and the possibility this could cause a serious collision.

“Speed limits are exactly that and are not targets. Motorists who exceed the speed limit significantly increase their chances of being involved in a serious, or even fatal, collision.” 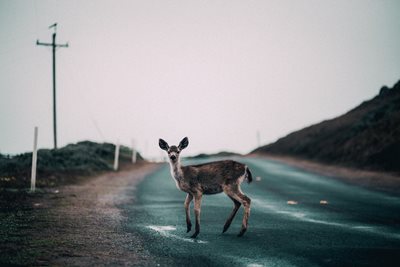