Minister of State at the Department of Transport, Hildegarde Naughton TD, is in Mayo today (1st November) to officially open the R312 Glenisland Bridge Scheme.

The R312 is an important connection to the Erris region of Northwest of Mayo, which serves a very large rural catchment area and is the largest Gaeltacht area in Mayo. It is of particular importance to the economical, tourism and regional development of the Erris Region and is the main access from South Mayo and further afield. The purpose of this scheme was to replace a section of carriageway which was substandard in width and alignment and provide a new safer realigned section of carriageway.
Minister Naughton and Cllr Martin McLoughlin, Cathaoirleach of Castlebar Municipal District, unveiled a plaque to commemorate the opening, while Fr. Chris Brennan performed a blessing of the development.

Minister of State at the Department of Transport, Hildegarde Naughton TD outlined

“I am very pleased to be here in Mayo today to officially open the new Glenisland Realignment Scheme. This project is vital to the families, communities and businesses of the Erris region and I am confident it will provide for safer travel for all road users in the many years ahead. Commercial vehicles in particular will benefit from the extended width and alignment as they travel on this new bridge at what is a particularly bad bend on the R312.
“These vital works also include the removal of direct access to some houses from the regional road and making the access points to two local roads safer.
“Getting the scheme through the various stages from design to planning, construction and completion took a lot of work and it is very positive to see the project, which will benefit all who travel along this route, come to fruition.“

Cllr Martin Mc Loughlin, Cathaoirleach of Castlebar Municipal District welcomed the opportunity to join with the Minister at the opening of the scheme “I am delighted to join with the Minister in opening the Glenisland Bridge scheme here today.  This project will make a significant difference to the wider community and all road users of the R312, which services a wide catchment area.  I would like to acknowledge all those involved in bringing this project to its completion “

Afterwards, Minister Naughton visited  the site of the new state of the art Castlebar Regional Training Centre which is to be developed at Lios na Circe, Saleen, Castlebar, where she had the opportunity to speak to the architects of the plans and also to the Personnel involved in devising training. Funding of €2m is being provided by Department of Transport for a state-of-the-art outdoor training facility.

The existing Regional Training Centre in Castlebar at Áras an Chontae, in place for over 20 years, facilitates the training needs of staff in local authorities, group water schemes, utilities and numerous other public and private companies in the West and Midlands of the Country on a self-financing basis. It is envisaged that the new facility will provide additional capacity and will again operate on a self-financing basis. 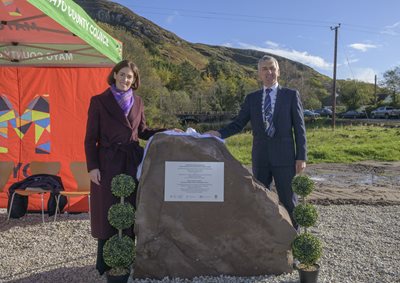