Mayo County Council Arts Service is delighted to announce a series of events taking place for the month of August as part of the Local Live Performance Programming Scheme (LLPPS). This is the fourth phase of the scheme which sees over €140,000 being allocated to events county wide, supporting those working in the commercial arts and culture sectors for the months of August, September and October.

We have a day of celebratory events taking place on August 18th in Ballina. The Jackie Clarke Collection, Ballina, will host the Secret Garden Circus from 11am to 4pm, to celebrate the 10th Anniversary of the official opening of the Jackie Clarke Collections walled Heritage Garden, the only green park space in the middle of Ballina’s town centre. Events are free and suitable for all ages. Email clarkecollection@mayococo.ie for information.

The Killala Live Festival takes place from August 19th to 21st and presents a host of activities including a busking competition and an historical walk, following in Humberts footsteps. Festival goers will be treated to a host of performances from Stuart Moyles, Some Craic, Cian & Dara and Gorilla Radio among others. Events take place outdoors on Church Street and Market Street over the course of the weekend. For more information contact killalacommunitycentre@gmail.com

Admission is free to all events.

The Local Live Performance Programming Scheme is funded through the Department of Tourism, Culture, Arts, Gaeltacht, Sport and Media and administered by Mayo County Council. 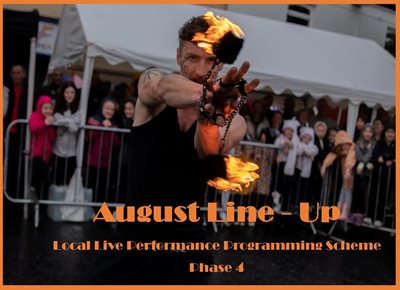