Decade of Centenaries exhibition launched at the Jackie Clarke Collection.

With the ease of restrictions, the Jackie Clarke Collection was delighted to launch ‘Keepsakes’ on October 23rd last to an eager crowd of visitors and contributors. To commemorate the Decade of Centenaries, Mayo County Council’s Arts Service in partnership with the Jackie Clarke Collection, undertook an Artist in Residency programme, and Margo McNulty and her project Keepsakes was the worthy outcome.

The residency took the idea of memory and keepsakes and why people collect which fitted in perfectly with the ethos of Jackie Clarke, as a safe-guardian of history. People from all corners of the county got in touch with Margo to share their stories and keepsakes of loved ones who had been involved in that tumultuous period of Irish history, namely the War of Independence, the Truce, the Treaty, and the Civil War. Margo worked with many people across the Mayo community including Florrie McBrien, Cauleen Barrett, Liam Barrett, Seamus Caulfield, Mary Gilvarry, Nuala Kelly, Shane Loftus, Vincent Roche, Frank Fagan, Thomas Connor, John Connor, Joe Mellett, Bronagh Joyce, and the Clew Bay Heritage Centre, John Twin McNamara, Edward King, Anne Sweeney Lavelle, John Cawley, Paddy Lineen Achill Historical Society, Michael Moran, Carol Banks, and the Westport Historical Society. Some stories were heroic, many were tragic, more were of perseverance. It is important as we reflect on this period to acknowledge how turbulent a time it was and to understand perhaps that some memories and stories were left unspoken.

Speakers at the launch included Cllr. Michael Loftus, Edel Healy (manager of the Jackie Clarke Collection), and Anne Marie McGing (Mayo Arts Office). The exhibition was launched by acclaimed Crossmolina-born artist Niamh O’Malley, who will represent Ireland at the prestigious Venice Biennale in 2022. Niamh’s powerful speech praised Margo’s remarkable achievement in bringing such a moving, evocative, and significant exhibition to fruition. A series of three billboards, in Westport, Castlebar, and Ballina, will feature aspects of the Keepsakes exhibition, bringing the work to a wider audience across the county. Keepsakes will run until Saturday November 27th and admission is free. The Jackie Clarke Collection is open from Tuesday to Saturday from 12pm to 5pm. See www.clarkecollection.ie.

The project was funded by the Department of Tourism, Culture, Arts, Gaeltacht, Sport, and Media. 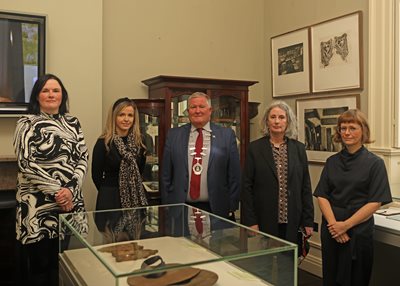