Cut Out For The Job

You’re driving along, you see a Garda in the distance, what do you do?  You ask yourself - am I speeding?  Do I have my seat belt on?  Get off the mobile phone, are these your reactions when you see a Garda?

Don't be surprised if you see something unusual on the side of the road today in County Mayo.

Thousands of motorists on Mayo roadways will be duped by an April fool’s trick with a difference — a life-size cardboard cut-out of a garda with a speed gun faced at the traffic.  A good April Fools' prank makes everyone laugh, even the person who's the target of the prank.  The key to pulling off a great prank is making sure no one is harmed by it.  The purpose of this prank is to deliver a message.

The message is clear:  “Don’t be fooled — speed kills and please focus on your driving.”

The zany initiative is being undertaken by Mayo County Council, with the support of local gardaí, to bring attention to the need for driving within the speed limit, with particular focus on speed, as the number of fatalities on our roads increase.

With the longer evenings and the relaxing of the Covid- 19 restrictions, there will be more pedestrians and cyclists using our road network so we need to be extra vigilant on our roads.

The purpose of the cut-out is to let people know the only ones they are fooling when they are speeding are themselves.

Mayo County Council has made life size cut-outs of the Garda and has strategically placed them where they have maximum impact.

“People might feel fooled if they slow down when they see the speed-gun in the distance, only to find out it was only a cardboard cut-out.  Others might go past it above the speed limit, and feel some relief when it was not a real speed check, Gardai or go safe cameras can’t be on every road so we want to raise awareness around speeding ’’ said Noel Gibbons, Road Safety Officer in the Communications Office in Mayo County Council.

“But the point we were trying to get across is that when you speed, you are putting yourself and others at risk.  It’s not just about avoiding penalty points for speeding, it’s about driving safer at all times.  We also want to create a safer environment for other road users such as cyclists and pedestrians to encourage smarter travel.”

Just like the real thing, the one-dimensional officers are trying to put the brakes on speeders.

Drivers too need to pay greater attention to their speed, particularly in urban areas, as this pre-crash factor has the biggest impact on vulnerable road users”.

Neil Fox, Road Safety Advocate, said “We are all more vulnerable on the roads than we realise, and equally so we have more power to promote and ensure safer road conditions than we imagine.

The death of a loved one in a crash is something that puts the brakes literally on the many lives left behind, while stealing the person away completely.  My sister's road death taught me that the hard way. However, tragedy can spur us on to commit to safe roads.

So my message today is : Don't be a fool, don't speed through life, see it, enjoy it, live it. Speeding is being in a hurry to nowhere. No reason, no appointment, no person is so vital that risking your life and the lives of others is ever worth it. Be cool, slow down, don't be speed's fool.”

“There was a 21% increase in the number of penalty point notices issued for speeding last year.  There were 144,000 notices issued for the offence of speeding in 2020 - nearly 25,000 more than in 2019.  We would like to reduce the figure in County Mayo because speed plays such a major role in causing collisions on the road,” said Sergeant James Malone, of the Roads Policing Unit, Castlebar.

They say that you can only be in one place at any one time but these cut-outs will appear on some of the busiest roads in the west today.  It is all about raising awareness.  We can all play our part in reducing fatalities and serious injuries on our roads. 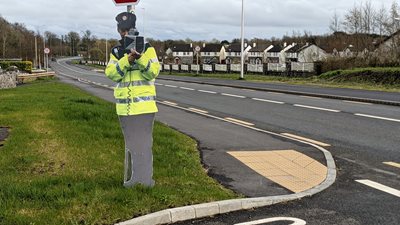