“crosses folk, world and alternative textures in a graceful way” The Irish Times

“She is a spirited and an upliftingly distinct female singer.” Hot Press

‘Waves’ is a collection of four songs that originated during the lockdown in 2020. Breda Mayock’s background is in traditional and folk music, and over the years she has been influenced by many other genres. Her more recent work transverses indie folk sounds and moves into more abstract soundscapes. The EP ‘Waves’ will be released on the 28th June 2021 on all music streaming platforms.

Breda is a recipient of ‘Navigating a Future’, a Mayo County Council Public Art Commission in which four professional practicing artists living in Mayo were commissioned to create artwork in response to the ongoing impact of Covid-19 and our lives going forward.  Breda is presenting ‘Waves’, a collection of songs she wrote and developed over this period. The commission provided an opportunity to research and create new work and to learn new ways of making and recording songs and was funded by the Department of Housing, Local Government and Heritage under the Per Cent for Art Scheme.  The EP release will be followed by a new audio-visual piece in July 2021.

Steve Cooney, Robbie Harris and Mayock came together in 2020 between lockdowns. They played the songs and recorded ideas and sounds and discussed instrumentation. Over the coming months recordings and conversations were exchanged, the songs were transported from Mayo to Donegal and back again and then on to Dublin where they were mixed by Mark Murphy at Secrets and Machines.

Throughout her career Mayock’s experience includes studies in fine art, and her early musical adventures saw her explore the French world music scene with producer Hector Zazou in Real World Studios where she recorded with Peter Gabriel. She worked with Hughes De Courson‘s fusion of Baroque and Irish music– O’Stravaganza and with Breton harpist Alan Stivell’s album 1 Douar.

‘Waves’ was recorded in Mayo and Donegal and mixed in Dublin. 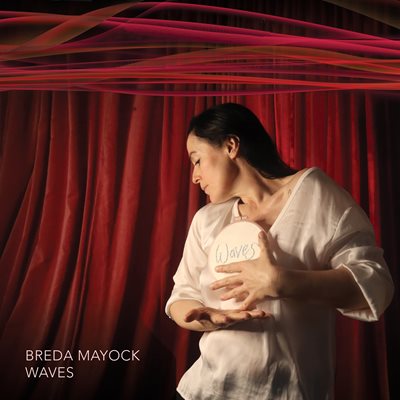