Join Eibhlín Ní Chonghaile and Dáithí Gallagher in a one-hour flagship programme broadcast on Mayo Day, 1st May on TG4 at 9:30pm, and on the TG4 Player worldwide to celebrate all things Mayo. The programme will feature the best of Mayo music and culture, conversation and craic, and showcase the beauty of this Atlantic county. Guest appearances are expected from the Mayo diaspora in every corner of the planet and even beyond, with Aeronautical Engineer Norah Patten due to drop by. We chat with photographer Fergus Sweeney about Blacksod Lighthouse and continue to head along The Lost Valley and sample local produce on The Gourmet Greenway. The standard of musical performances will be exceptional with Matt Molloy of The Chieftains, Laoise Kelly, Billow Wood, Chantelle Padden, Lisa Canny, Emer Mayock, Tom Doherty and family and more.

There are over 3.5 million people from all over the world with Mayo connections. Some of them tell us about their lives abroad. We hear from Andrew Walsh professional chef from Breaffy who runs three restaurants in Singapore. Dr Lisa Ní Chuinneagáin is a flight doctor from Ballina and located in the UK. Mary O’Halloran from Foxford brings us some tales from the city that never sleeps where she owns Irish pub Mary O’s.

The hugely successful Mayo Day celebrates its seventh year on Saturday, 1st May 2021 with an outstanding programme of events to be viewed from around the globe. The Mayo Day Festival is virtual again this year, but this has brought unexpected opportunities and expanded the reach of the celebration. It’s a unique occasion as Mayo remains the only county with its own name day, celebrating achievements, heritage and culture, diaspora and community spirit.

The emphasis is on People and Place and taking this opportunity to showcase the best of Mayo.

Martina Hughes, Head of Communications, Mayo County Council outlined “Now in its seventh year, Mayo Day has been a fantastic initiative that has highlighted the unique people and place that is our County. While we celebrate another Mayo Day in Covid times, we are delighted to have this opportunity to collaborate with TG4 in delivering Mayo Day - Ár bPobal, Our People, a TV programme that showcases the very best of Our County and its people at home and away. This Mayo Day show is sure to bring Mayo people across the globe together in spirit and hopefully once travel allows, an opportunity to visit the County again”.

Proinsias Ní Ghráinne, Commissioning Editor, TG4 says that, “TG4 is delighted to partner with Mayo Day to bring this astounding wealth of talent all from the county of the Green and Red to audiences throughout Ireland and the globe via the TG4 player. We are especially excited to support the composition of a new tune to the traditional Irish music repertoire by Laoise Kelly, the current Gradam Ceoil TG4 recipient and trust that 'The Mayo Fling' will be played near and far for generations to come.”

Catherine McConnell, Director of Services at Mayo County Council confirmed “One of the original and ongoing aims of Mayo Day is to promote Mayo nationally and internationally as a positive location for business and tourism and to further enhance the image of Mayo as a progressive County at the heart of the Wild Atlantic Way. We are delighted to have had the opportunity to work with TG4 on this flagship event for 2021. Our key audience is of course Mayo people around the world and through the TG4 player and its availability worldwide, this platform works really well. I would like to acknowledge our partners at Tourism Ireland, Fáilte Ireland and Creative Ireland in supporting this project.”

Hailing from Achill Island, Dáithí Gallagher lives and breathes all things Mayo. Gallagher is heavily involved in promoting the culture and language in Mayo. He is also a musician and is part of a band called ‘Pitch Slapped’ and is involved in musicals in the county. Himself and his friend Chris Duffy exploded onto the scenes with their hit song ‘Mayo For Sam’ in 2013.

Although from Connemara, Eibhlín Ní Chonghaile is now an adoptive Mayo woman, having moved and settled in Ballina ten years ago. The journalist and presenter has graced our airways for the last 21 years on RTÉ, TG4, Sky News Ireland and RTÉ Raidió na Gaeltachta. She has three children who she says she will soon have to give in and buy Mayo jerseys for them!

The musicians taking part in this programme are:

Billow Wood, create modern magic with their original fusion of folk, traditional Irish music and indie pop rock. Members, Bríd O'Donnell, Ciara O'Donnell, Harry Lawlor, Mark O'Donnell are all multi-instrumentalist and vocalist. They have performed across the globe, including headlining their own US tour in 2019.

Having lived in different countries and through a global pandemic this is the first time in many years that brother David & Kieran Munnelly will perform together. The Munnelly’s have a flair to their music that is rare to come across. The box player and flautist play their musical instruments to their fullest international sense.

Hailing from Belmullet this country star is on the rise. Chantelle has recently appeared on the latest season of ITV’s hit series The Voice UK. She was on team Olly Murs but she just missed out on the live shows having been beaten in the battle round.

Tom Doherty comes from a musical family in Foxford. He started to learn the accordion from Martin Donoghue when he was four years old. Tom won his first All-Ireland on the concertina. He also has an All-Ireland title on the Melodion. He has since progressed to become a professional musician and music teacher. He has toured extensively in Ireland and Europe and the U.S. Tom's music is featured on numerous television recordings and CDs. His four daughters join him to perform on Mayo Day on TG4. 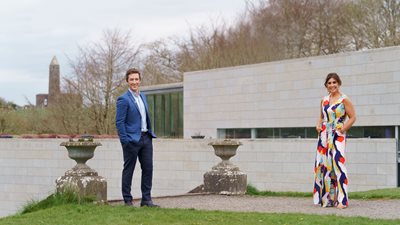