To join the webinar simply click on this MS Teams link at 11am on Friday the 20th of November 2020.

The webinar will include the presentation of research completed in 2020 by Dr Mary O Connor, Brain & Behaviour Institute and Dr Janine Mc Ginn, GMIT.

This emancipatory research project was commissioned by Mayo County Council in collaboration with Mayo North East & South West Mayo Development Company to identify barriers experienced by women when engaging in the political system at local, community, county and national level in the country. A specific objective was to explore the motivators for women to become involved and their experience of involvement. Another objective was to explore the recommendations given by the women to address any identified challenges and by so doing to contribute to the body of knowledge for policy makers and local politics in Mayo and beyond.

Guest panellists for webinar include

Annie Lawrence Community Health Worker with Mayo Travellers Support Group and recent contributor to the Crown project. Annie has worked for many years promoting wellbeing and health initiatives with the Traveller Community. Annie is a member of the Mayo Traveller Interagency Group and is Chair of this group's Organisational Working Group.

Dr. Flynn held the position of Vice President for External Affairs at CIT for the last six years, with responsibility for research and innovation, external engagement, internationalisation and alumni.

Dr Flynn's undergraduate and postgraduate academic qualifications are in computer science and mathematical physics from UCC and she holds a PhD from the University of Limerick.

Originally from Yemen but now a refugee in Ireland she is a student in GMIT studying Forensic Science. Sara is a activist for equality and human rights for MASI (Movement of Asylum Seekers in Ireland).

Celesta Khosa works with Mayo County Council. Originally from South Africa, Celesta now has refugee status. Celesta has been working with Amnesty International facilitating stories of Borders. Celesta is an activist for equality and working with MASI (Movement of Asylum Seekers in Ireland. 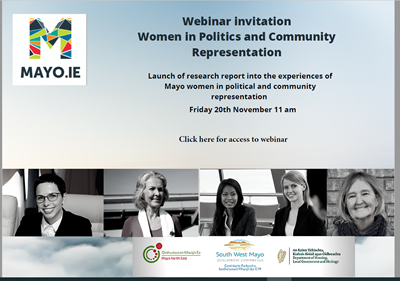