Don't Push On - Take That Break

Mayo County Council Road Safety is undertaking an eye-catching initiative for this bank holiday weekend to remind drivers of the dangers of driver fatigue as many undertake staycations.

Road signs of Mrs Doyle (from ‘Father Ted’) will be erected around the County, located near or at some Corrib Oil service stations, which will have road safety slogans on them in an effort to remind drivers and motorcyclists to freshen up by taking a break and to think about the consequences of driving while tired. Sadly, many drivers are still falling into old habits, some of which are potentially lethal.

The campaign has been given thumbs up by Pauline McLynn who played the part of Mrs Doyle in ‘Father Ted’ and also by the production company Hat Trick Productions Limited which produced ‘Father Ted’ which has given the Road Safety Office within the Communications Department of Mayo County Council a licence to use the images.

Mayo County Council’s Road Safety Officer, Noel Gibbons said: “Exhausted drivers pose a significant safety threat, to themselves, to their passengers and to others who share the same road space.  Fatigue is a major contributory factor in around 20% of road crashes, particularly in the early hours of the morning.  However, on long, monotonous stretches of motorway it’s likely that a much greater proportion of collisions will be fatigue-related.”

“These collisions are typically around 50% more likely to result in death or serious injury, as the driver is unable to take avoiding action to reduce severity of an impact.”

“It may be the length of the journey you’re making that puts you at risk, but it could be your general state of alertness before you get behind the wheel.”

“Crucially, when you’re driving, you will know when you’re starting to feel sleepy – it won’t just suddenly happen.  So, don’t ignore the warnings your body is giving you. Make the decision to stop driving as soon as it’s safe and practical. Giving yourself a proper break could make the difference not just for your own safety, but for all road users.”

The Cathaoirleach of Mayo County Council, Cllr Michael Smyth commented: “We have seen too many horrific injuries caused by people falling asleep at the wheel to take this lightly.  Sleep related collisions tend to be more serious than other road collisions because the driver or rider is unable to react before a crash.  You don’t fall asleep without a warning; if you are fighting to keep yourself awake, then get off the road!” 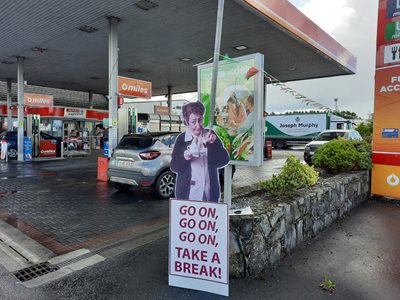