Re-discover the captivating story of Paul Strzelecki, a Polish humanitarian who saved over 200,000 children during the Great Irish Famine

A Forgotten Polish Hero of the Great Irish Famine: Paul Strzelecki’s Struggle to Save Thousands

This exhibition presented by the Polish Embassy in Dublin explores the fascinating life and achievements of one of the great humanitarians of the nineteenth century, whose contributions to Irish Famine relief have yet to be widely known and commemorated.

Count Paul (Paweł) Strzelecki, a world-renowned Polish explorer and scientist, volunteered to work in Ireland to combat raging Famine over a three-year period (1847-49) as the main agent of the British Relief Association (B.R.A).

In order to alleviate the critical situation of famished Irish families and especially children, Strzelecki developed a visionary and exceptionally effective mode of assistance: feeding starving children directly through the schools. He extended daily food rations to schoolchildren across the most famine-stricken western part of Ireland, while also distributing clothing and promoting basic hygiene. At its peak in 1848, around 200,000 children from all denominations were being fed through the efforts of the B.R.A., many of whom would have otherwise perished from hunger and disease.

Despite suffering from the effects of typhoid fever he contracted in Ireland, Strzelecki dedicated himself tirelessly to hunger relief. His commitment was widely recognized and praised by his contemporaries, and this exhibition endeavours to bring his achievements and legacy back into the public eye.

The content of the exhibition was commissioned from leading experts in the field – Prof. Peter Gray (Queen’s University Belfast) and Assoc. Prof. Emily Mark-FitzGerald (University College Dublin) – and includes several rarely seen images of Famine relief and charity, drawn from collections of major museums and libraries in Ireland, Britain, Australia and the United States.

The exhibition was launched on 8 May, 2019, by the President of Ireland Michael D. Higgins in the Royal Irish Academy in Dublin, after which it has embarked on a nationwide tour to over 20 locations.

The exhibition was presented in the National Museum of Ireland, Country Life in Castlebar throughout 2021 and is now touring the following Co. Mayo libraries: Ballina, Westport, Belmullet and Swinford.

The exhibition is also accompanied by educational workshops on Paul Strzelecki and the Famine for local primary schools in Connacht held in selected venues hosting the exhibition.

The exhibition is presented in English and admission is free.

For information on other venues and dates visit www.strzelecki.ie. 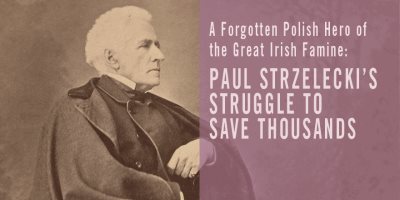