This project gained Interreg NWE funding in excess of €12 million in April 2020 to help develop the notion of “Green Electrification” using Airborne Wind Energy (AWE), utilising the strong and steady winds at higher altitudes and with reduced infrastructure costs.

MegaAWE aims to test an already developed Power plane (AP3) at a new test site to be developed in Bangor Erris, Co Mayo. The test system consists of a ground-based winch generator, a launch and land platform, a tether and an aircraft shaped device.

MegaAWE also plans to deal with other design and development issues associated with bringing larger capacity AWE systems to market.

The proposed test site is based at a section of cut away bog in Bangor Erris in North Mayo. Planning permission has been granted for the test site and construction works have a site start planned for Q4 2021.

The MegaAWE project is composed of 11 main Partners, 3 sub Partners and 10 Associated Partners from different European countries and the UK. The value of the project is in the order of €12 million, with a grant of €6.8 million euros. Mayo County Council are the lead Partner and are responsible for Project Management and Communications.

A Dutch company called Ampyx Power are the developers of the Power plane technology, Mayo County Councils involvement stems from early contacts with Ampyx Power dating back to 2016. They are currently planning to test a 150 Kw on field pilot in Mayo but have plans to develop bigger capacity units with commercial applications. With their compact systems, they avoid the use of heavy towers and foundations, possibly making it a cost-effective and environmentally friendly solution to produce wind energy.

RWE Renewables is one of the world's leading renewable energy companies driving the expansion of renewable energy in more than 20 countries on five continents, they have taken a lease on the Bord na Mona lands in Mayo and they are the developers of the test site.

Parkburn Precision Handling Systems (UK) are another of the partners, they are an engineering company involved in the design and development of the mechanical equipment needed to facilitate the launching and landing of the power plane.

The overall objective of the project is to bring large scale multi megawatt Airborne Wind Energy systems closer to the market. With AWE, new locations for wind energy can be unlocked including floating offshore and remote onshore applications. Having this technology tested on our doorstep in Mayo has potential for encouraging our local companies to get involved in the supply chain for the increasing future demand for renewables. 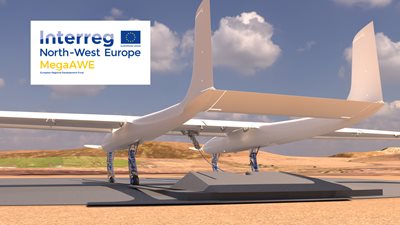