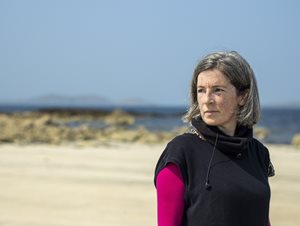 What do you want?

I began the planning and research phase with an attitude of no limits, anything is possible, allowing my imagination to run wild.  Ideas evolved, plans changed, and I waited...There were lots of distractions and frustrations during this last difficult year and I was grateful to have a creative process to focus on.  My daily practice became an antidote for the limitations imposed by public health restrictions which in turn informed how I moved and how the work developed.

I looked for more freedom and space to move inside my joints, between my bones, finding where flow was blocked and why.  My movements became smaller, deeper.  I became more aware of sensations and I explored different breathing techniques and the science behind them.

The work pointed me to a place between, between what's happening inside and outside of myself, what's happening now, before and after, searching for and sometimes finding a point of balance.

The most interesting aspect of the work so far has been exploring my relationship with music.  This is the first time I have had an opportunity to work with a musician composing an original soundtrack and the process has been full of the unexpected.  Asked, what do you want?...I began a process of exploring sounds, silence, instruments, moods, vibrations, how they affect how I feel and move.  And the process continued......

As I write I have finished filming and am preparing an initial draft edit of the footage.  I hope to have the piece finished by the end of September.

and the weight of my bones