When Cuban guitarist Ahmed Dickinson Cárdenas first heard the music of fellow countryman Eduardo Martín he felt euphoric. Martín’s style has an expansive sense of freedom that taps into pre-Columbus traditions, jazz, flamenco, pop, Afro and traditional Cuban. The guitar is his favoured instrument to mirror the melodic and rhythmic intricacies of the Americas’ cultural diversity. Before moving to England, Dickinson Cárdenas took lessons with Eduardo. Since then, their friendship, idiosyncratic empathy and mutual respect have transformed into a vehicle that connects, incorporates, juxtaposes their different generations, musical ideas and ultimately a spiritual journey that drives this unique duo. The show compiles some of Grammy nominee composer Eduardo’s most alluring works for two guitars. Prepare to listen to classical styles merged with rock and son montunos; old Yoruba chants or feel-good rumbas with funk- boleros, and new age tunes and cinematic pieces sitting alongside Cuban tumbaos with slap bass. The Bridge represents a timely celebration of the past and present of the many traditions enriching the Latin guitar, conveying a true sense of continuity and fluidity through its tunes. 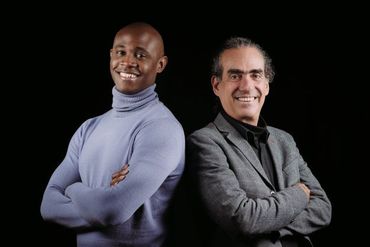