Straide Talking Social Christmas Gathering Straide Women & Active Age Group are organising a social Christmas Gathering on Thursday December 8th and inviting all their Straide neighbours. The organisers are especially hoping those at home or retired will come along and join the gathering between 2pm and 3.30pm in Straide Davitt Community Hall. December 8th has been an important day in people’s calendars for generations in Ireland and elsewhere. It is hoped this will be the beginning of a new Tradition in Straide, a day during Advent and in the lead up to Christmas to meet and greet neighbours. In the past, December 8th was an important fair and market day for the sale of live geese and turkeys for Christmas. With most Catholic schools closed for the religious Feast of the Immaculate Conception, the day grew to become a traditional Christmas shopping day. Local towns and Dublin city became thronged with shoppers from the countryside. It also became the traditional day for putting up the Christmas tree. In more recent times this shopping tradition has declined, due in part to online shopping, ‘Black Friday’ deals, and schools no longer closing. The broadcast date of RTE television Late Late Toy Show has replaced the 8th of December as the traditional date to put up Christmas decorations in many homes. Nonetheless, the 8th of December remains an important date in the imagination and memories of our older generations. It will hopefully be a promising afternoon for the Straide Talking event. 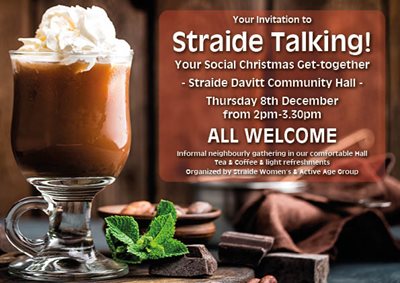