Husband and wife, Gráinne Hambly from Mayo and William Jackson, originally from Glasgow, are two internationally recognised exponents of the harp, who also play a variety of other instruments. As well as working solo and with other musicians, they have been performing and touring as a duo for the past 15 years and have released a CD 'Music from Ireland and Scotland’ in 2009. They have toured extensively throughout Europe and the USA as well as performing at the Rio International Harp Festival in Brazil and in Colombia. Some recent live performances include Edinburgh International Harp Festival, Farmleigh House and Doneraile Court concert series (2019). They direct the Music Generation Mayo Harp Ensemble and have published 3 arrangements for harp ensemble / duo. Recent online performances include the opening concert for Culture Ireland’s Ireland Performs initiative; livestream concerts for Keep Music Live Project; Somerset Folk Harp Festival; Philadelphia Ceili Group Festival as well as a contribution to Harp Ireland/Cruit Éireann’s Harps for Hope video series online. Performances typically consist of a selection of Irish and Scottish tunes (including 17th and 18th century harpers' tunes, airs, traditional dance tunes and recent compositions) played on 2 harps, bouzouki, tin whistle and concertina. They are known for their creative and fresh arrangements of old tunes, as well as William’s newly composed pieces. They also particularly enjoy sharing background stories on the music with their audiences. 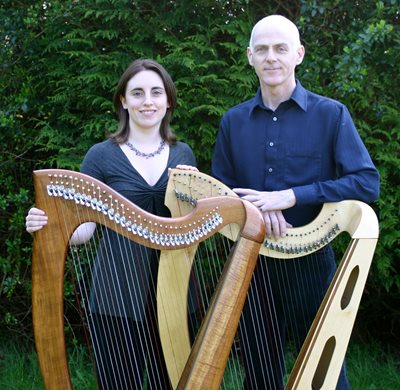