Cong Abbey: Canons, Canonesses, Characters and Crosses Conference will draw on the expertise of archaeologists, art historians, archivists and historians to explore the rich heritage of Cong Abbey and its impact on this area straddling the Galway/Mayo area of Upper Lough Corrib. Cong Abbey is one of the best-preserved medieval monastic foundations in Ireland. Founded early in the twelfth-century by the O’Conor kings of Connacht for the Regular Canons of St Augustine as part of a wide-ranging reform of the Irish church, it remained the order’s Irish stronghold until the death of its last member, Abbot Patrick Prendergast, in 1829. This weekend conference will explore the architectural, artistic, economic, pastoral and spiritual activities of both the Regular Canons and their female counterparts the Regular Canonesses, in Cong and its environs over a span of seven centuries. Building on recent research on the Augustinian Canons in Ireland, it will situate a much-loved local monument in its wider national and international context and promote interest in the Abbey as a focus for heritage tourism. Conference Programme: Friday, 19 August: Introduction to the Conference, Music and Food: Ryan's Hotel, Cong, 8pm Saturday, 20 August: Conference: Crossroads Community Centre, Cong, 9am to 5pm. See Conference website for list of speakers. Sunday, 21 August: Mass and Tour of Inishmaine Abbey, 11am 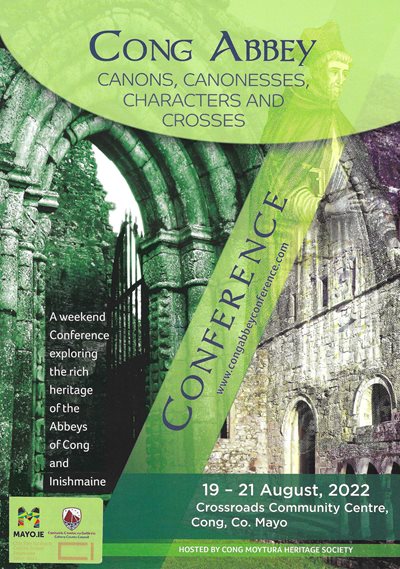