In Search Of Barn Owls In Mayo

BirdWatch Ireland are undertaking a survey of Barn Owls in Mayo this summer and they are requesting the assistance of the public and landowners to report information on Barn Owls to help direct the survey efforts.

The Barn Owl was once a much more common sight throughout Mayo. Over recent decades, Barn Owl populations have suffered extensive declines and are now a Red-listed Bird of Conservation Concern in Ireland. As a top predator and sentinel species for the health of our countryside, the declines in Barn Owl populations are extremely worrying. The changing agricultural landscape has resulted in the loss of suitable habitats, including a reduction of prey-rich foraging habitat and nesting sites. Alongside these land use changes and the loss of habitat, the increased use and increased toxicity of anti-coagulant rodenticides, and the expansion of major road networks are likely to be the main factors which have influenced the declines in the Barn Owl populations.

Although Barn Owl populations have declined over recent decades, there seems to be early indications that Barn Owl populations may be recovering in certain parts of their range. In recent years, Barn Owl pairs have moved into nest boxes provided for them in Mayo and re-established in old ruins which have not held Barn Owls for many years. One of the reasons for this recovery may be due to the range expansion of non-native small mammal species, the Greater White-toothed Shrew and the Bank Vole, both of which are recent arrivals to Mayo and are taken as prey by Barn Owls and other predators.

The Barn Owl survey in Mayo aims to establish how Barn Owls are currently faring in the county. The findings of the survey will be used to ensure the protection of nest sites and to direct targeted conservation efforts such as the provision of nest boxes to help the local population.

“We are delighted to be working with BirdWatch Ireland on the Mayo Barn Owl Survey, which is supported by the Department of Housing, Local Government and Heritage, under the National Biodiversity Action Plan, and Mayo County Council” said Deirdre Cunningham, Heritage Officer. “Local knowledge will be very valuable to the survey, and we are encouraging people to provide information on nest boxes or report sightings of Barn Owls in Mayo”.

John Lusby of BirdWatch Ireland explained the citizen science element of the survey, “It is a very special experience to glimpse the ghostly form of the Barn Owl floating silently over their hunting grounds in the dead of night, or to hear their eerie screeches and strange snoring calls. Everybody remembers such an encounter, and we are asking people to report this information to us, which will greatly help our survey efforts to locate nest sites and to determine the health of the population “.

He added, “we are also looking for information on Barn Owl nest boxes in the county, many different groups and individuals have gone to great effort to help Barn Owls in Mayo and have installed purpose-built nest boxes, we hope to get a better idea of how many nest boxes are in place and the portion that are being used by Barn Owl, and we would ask that anyone that has put up a nest box to let us know “.

You can help the survey and conservation efforts by reporting any information that you have on Barn Owls in the county by visiting https://birdwatchireland.ie/our-work/surveys-research/research-monitoring/raptors/barn-owl-survey/

BirdWatch Ireland also stress that Barn Owls are a protected species and can be very sensitive to disturbance, and that potential nest sites should never be approached or interfered with in any way.

BirdWatch Ireland is the largest independent conservation organisation in Ireland. Established in 1968, it currently has over 15,000 members and supporters and a local network of 30 branches nationwide. It is the BirdLife International partner in the Republic of Ireland. You can also visit their website at www.birdwatchireland.ie 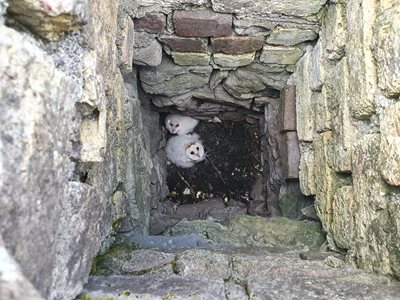