Driving With Hay Fever - Nothing to be sneezed at says pharmacist

The hay fever season in Ireland usually runs from March to September. As anyone with the condition will confirm, the symptoms can include sneezing, coughing, a runny or blocked nose, itchy or watery eyes, itchy throat, mouth, nose and ears, headache, earache and fatigue so road safety professionals and pharmacists are warning motorists about the dangerous effects that medication can have on their driving ability.

For drivers, hay fever is much more than an inconvenience. If you suffer badly, you probably shouldn’t drive. A sneezing fit can be dangerous on the road, hay fever drugs can also be risky, drivers should be careful choosing over the counter remedies, some hay fever medicines can make you very sleepy so drivers should be careful to choose non-drowsy versions. If you’re in any doubt ask the chemist for advice.

Hay fever, cold and flu treatments, pain killers, antihistamines, and even some eye drops, can all affect the central nervous system in a way that causes drowsiness, reducing the ability to concentrate on driving.

Tom Treacy pharmacist said: “Many motorists don’t realise the effect that prescription or over-the-counter medication can have on their driving.

“Most medicine packaging doesn’t stress enough how driving may be impaired, so it is every motorist’s duty to check before they start taking medication that it is safe and, if it isn’t, there are often alternative medicines which won’t impair driving. With a lack of awareness around drugs and driving, motorists should talk to their doctor or pharmacist about the effect of their medication.”

As a result you should avoid anti-histamines(that make you drowsy) if you’re planning to get behind the wheel. Instead, follow these top tips to stay safe behind the wheel this summer:

Noel Gibbons road safety officer said: “With summer comes hay fever, but this year it really is stinging a lot of drivers. The current pollen boom means motorists are going to be desperately relying on their antihistamines to keep their symptoms at bay.

“But what they may not know is that some can cause drowsiness and seriously affect their ability to drive. If in doubt, they should speak to their doctor or pharmacist for clarity.” 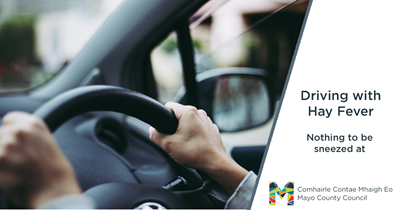