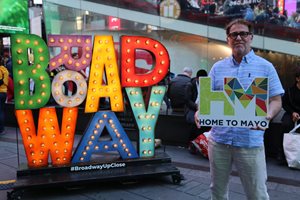 Born and raised in the little village of Lakefield in the barony of Erris in the north west corner of Mayo.

Where in the world are you now?

I have been living in New York City since 2005. Mainly working in Theatre as a director, actor and writer. I have directed fifteen different theatre productions here in the Big Apple over the years and performed in just as many. A play I wrote called  “The International” won Best Play in 2013 at Origins Irish Theater Festival and went on to a very successful run in Playwrights Horizons Theater on 42nd street. This year I will be directing public readings and a full theater production in the autumn. I am currently writing two plays, “Haze” and “Shall We?”, and hope to have them in production in early 2023.

What you love and miss about the County?

When you live in a place like New York you miss everything. The scenery, the fresh air, walks along pristine quiet beaches but above all you miss family and old friends.

What you think of Home to Mayo?

Great idea. I wish I could be there this time.

At the moment the plan is August of this year. Work permitting.