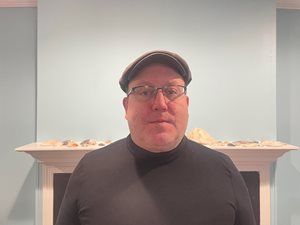 Mayo connection?
Both of my father’s parents came from near Knock.  I have many cousins – more with each passing month it seems – near Claremorris, Knock, and Kiltimagh.

Where in the world are you now?

I grew up in the Philadelphia area, but I live in New York, New York where I work as a Technical Writer for FreeWheel, a Comcast Company.

I also write novels, plays, stories, poems, and screenplays.  My new novel, Worlds, about a family with Mayo roots. was launched at the New York Irish Center in October 2021.  My newest play, Boann and the Well of Wisdom, had a successful run at Ryan's Daughter pub in Origin Theatre's 1st Irish Festival. Now the show is preparing for a production in a 75-seat conventional theatre as part of the New York Theater Festival.  Other publications include the short-story collection, Dreams and Dull Realities and the novel, The World.  My fiction has appeared in The Medulla Review and Danse Macabre and my poems in such journals as the North American Review and the Grey Sparrow Journal.  My screenplays have won several awards over past couple of years,

What you love and miss about the County?
First and most of all, I miss my welcoming and fun family, and enjoying the friendships we have forged since connecting as adults.

What you think of Home to Mayo?
I think it is wonderful idea to encourage people to visit one of the most beautiful and truly Irish of Ireland’s counties.  I agree with the sentiment of the promotional video: although I was born in the States, I feel that in some ways Mayo is always with me.

At least that is how I console myself when I suffer the terrible heartache of having to leave physically.

As soon as possible!  Hopefully, within the next year.  I have several new cousins to meet!

Maybe I can bring my new play, Boann and the Well of Wisdom, home to Mayo!  I’m working on it …