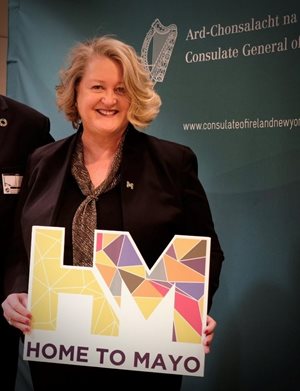 Mayo connection?
Born and raised in lovely Co. Mayo! I’m originally from the village of Ballyvary.

Where in the world are you now?
I currently live in NYC and I work in the Mayor's Office of Operations as the Chief Strategy Advisor. I currently lead the multi-stakeholder effort to implement Vision Zero – the City’s plan to reduce traffic fatalities and serious injuries on our streets.

What you love and miss about the County?
I miss my family and friends the most, but luckily, I’m able to get home pretty regularly. I also miss the easy laid-back lifestyle, the fresh country air and the good humored nature and quick wit of the Mayo people—and of course I miss the craic!

What you think of Home to Mayo?
I love the idea—there is so much that Mayo has to offer the visitor—and I think it’s great that there will be so many amazing events running throughout the month of May. That coupled with all that Mayo has to offer — from the beautiful beaches to the wild unspoiled wilderness right at our doorstep.

Plans to come home?
Yes! As soon as I can. I’d love to get home during the summer when the days are long and now that the pandemic is receding (hopefully) there is much to catch up on.

As the successful month-long celebration of the #HometoMayo initiative comes to a close, I wanted to share a story and some photographs of my grandmother’s journey from New York City home to Mayo many years ago...

On June 19, 1929, my grandmother May O’Donnell, 25-years old, boarded the RMS Scythia in New York City bound for Cobh, Ireland. After seven years away, she was going home to Mayo for a vacation, which in those days meant for a few months because the transatlantic crossings took so long. In New York she had become an indispensable member of the Hugh King family—taking care of their house and children. King himself was an immigrant from Ireland, who became a pioneer in the oil industry. When she left, Hugh King, whom she affectionately called Papa King, told her through tears, “please don’t leave because I have a feeling you won’t come back”. May also said goodbye to her two younger sisters Kathleen and Agnes whom she had brought over from Mayo a few years earlier. Agnes and my grandmother did everything together and she also pleaded with her to come back. And lastly, May bid farewell to a young man who was very fond of her and had given her a gold watch before she left.

The photographs from her voyage home show my grandmother with her friends enjoying what she termed in one photograph “The sweet life”. In this photograph, she is holding a Kodak Brownie Camera on her lap, which survives to this day, as well as the many photographs that captured her life during the roaring twenties in America.

Little did she know then, but her entire world was about to change, and this would be her last transatlantic voyage.

A short while after returning to Mayo, she attended a party in Currane that a neighbor was throwing for some other returning “Yanks”. At the party she met my grandfather, Michael – a very eligible bachelor who was a well-known businessman and farmer from Ballyvary. He owned a business called “Cycle Works” that according to an ad in the local newspaper at the time, was a place where all the “best brands were stocked” and “where lovers of ‘the wheel’ can be accommodated with all accessories.” In addition to the business and the farm, he also operated a taxi business.

During the many months at home, she saw my grandfather often and as the story goes: one day when she was renewing her passport at the local post office, he told her “Ah sure you won’t be needing that, please stay here with me instead”. A short time later Agnes’s husband, John McDermott was visiting from the States, and she asked him to please return the gold watch to the man she left behind. He said he would. By the autumn of that year, her beloved employer Hugh King would be dead, and the Wall Street Crash would bring everything tumbling down.

My grandparents married the following January in 1930 and settled into the home where my grandfather grew up in Ballyvary – as did I, but that’s another story. Next came the children, my uncle Michael was the first born, followed by my Aunt Mary, Uncle Sean, my dad, Vincent, and Uncle Martin the youngest.

Sadly, I never did get to meet my grandmother, as she passed away at age 53 in 1957. I imagine she would be happy to know that her granddaughter made it over to her sister Agnes, my great-aunt who by then lived in Norwalk, Connecticut where she had raised her own family.

Over time, I got to know my grandmother through the stories that Agnes, then in her 80's, shared about her beautiful older sister. Together we would sit in her back garden on many fine summer evenings, as Agnes recounted their life together growing up on a farm in Keelogues, and vividly recalling the day that changed everything. An envelope bearing Agnes’s name had arrived from my grandmother in America. Inside was a letter along with an open ticket (commonly known as the American ticket) for the transatlantic journey by ship that would reunite Agnes with her sister. Take your time, my grandmother told her, stay awhile around the farm, but Agnes didn’t need any more time, and so within a week she had her suitcase packed and was ready to set sail to her new life.

“When I reached New York City, I didn’t have to get off at Ellis Island”, she recounted. “Your grandmother had it arranged so that I could go directly to the pier in New York City.” Her eyes began to tear up. “She looked so beautiful, your grandmother, standing there on the pier; I’ll never forget it. She always had the loveliest hair, brown and wavy; and she looked so beautiful. When I saw her there, she looked like an angel. The two McHale lads were with her, our cousins, you know, dressed out in their Sunday best. Oh, what a welcome they had for me. I couldn’t get over New York, the skyscrapers, the Statue of Liberty, I loved it all, loved being with your grandmother – oh the times we had.”

I think my grandmother would be happy to know that I’ve now made a life for myself in New York City – and that we’ve probably walked the same streets around where she lived 93 years ago on 107th street on Riverside Drive in upper Manhattan.

Her journey back home to Mayo in 1929 set everything in motion, and because of that, I now get to write this story.