We are asking motorists to be aware that air temperatures are always much higher than road temperatures in winter which can lead motorists into a false sense of security and may cause collisions on our roads.
Many vehicles are fitted with outdoor temp gauges. They are a guideline to the ambient air temperature but they can often give incorrect readings at times both day and night.

It is important to understand that the "official" temperatures are reported by thermometers located at around 2 meters above ground level and these temps as well as car sensors differ from road surface temperatures. Ever wondered why car thermometers flash up an ice warning when it's +3C? It may seem strange, given water freezes at zero, that your car is warning you about ice at +3C.

"It's because the ground cools more quickly than the air above it. So, when it's +3C in the air, the ground can already be close to 0C, allowing ice to form

Temperatures taken at ground level / road surface can be 2c to 3c cooler than air temperature only a few feet above.
Thus, frost can be occurring at the surface even when official temperature observations are reporting temperatures of 3c or 4c. Motorists must be wary of icing as air temperatures drop below around 3c as its highly likely you may be driving on road networks with black ice formed or forming.

If you are curious you can have a look at the road temperatures map on the TII website. Their excellent system of thermal mapping was put in place with winter ice and gritting in mind

The above photo was taken in Rossport Co. Mayo on a junction with street lighting and road had white frost, it shows the difference of outside air temperature at 1c to -7 c road temperature. 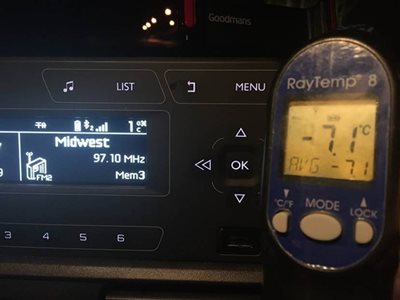